Biodiesel has been playing an increasingly important role in Brazilian energy matrix
and promoting the national bio-based economy. The biodiesel production in Brazil has
grown from 736 m3 in 2005 to approximately 4.4 million m3 in 2014. Among all the inputs,
soybean predominate the biodiesel production in Brazil with a share of 77.2 % in 2014
and made Brazil the 2nd largest biodiesel producer worldwide. Current models used in
energy balance reports have shown positive net energy ratio, indicating the renewability
of soybean biodiesel. However, the environmental impacts and the fair use of this agricultural
resource have debatably come to public attention. Consumers value more and more
the environmental sustainability of agricultural products, with a particular interest in the
greenhouse gas (GHG) emissions as a sustainability indicator. For policy and decision making
processes, this sustainability indicator is also being progressively demanded. To assess
the GHG emission of the soybean biodiesel production in Brazil, we used the data mainly
from the Center West region and partly from the neighbour regions, which represent more
than 70 % of the whole soybean production in Brazil. A life cycle assessment (LCA) model
from cradle to distribution was also integrated into our calculation and was divided into
four stages: the field stage; the extraction stage; the production stage; the distribution and
delivery stage. Carbon footprint through all stages are calculated and evaluated. Results
show an average GHG emission of 316 g COeq kg-1 of soybean in agricultural stage. The
largest source of GHG emission from the agricultural production in Brazil is the decomposition
of crop residues (36 %). Production stage contributes the highest amount of GHG
emssion (52%) in a non-integrated system, which suggests the emerging integrated system
(combined units from extraction and production) might have high potential in GHG emission
reduction. The whole study with the integration of the four life cycle stages of soybean
biodiesel will contribute to identify the main GHG emission source in the production chain
of Brazilian soybean biodiesel and suggest the mitigation priority for policy and decision
making.
Setembro 20, 2016 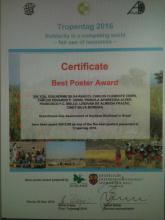